Your Guide To The Cherry Blossom Season In Japan | CoolJapan

Your Guide To The Cherry Blossom Season In Japan

Hanami, which translates to flower viewing, is more than just that. In Japan, it also symbolises the beginning of spring. Friends and family come together to appreciate the stunning sakura blossoms, usually done with a sumptuous picnic party. During this time of the year, cherry blossoms in varying hues of pink transform Japan into an ethereal fairyland.

Take your love for cherry blossoms to the next level and immerse yourself into the hanami experience. Keep reading to find out when and where to see the blooms. Plus, learn tips and etiquette for an enjoyable experience. Ahead, our guide to the cherry blossom season in Japan this 2020.

The cherry blossoms start blooming as early as late January in the southern warmer island of Okinawa and gradually move northwards up to Hokkaido. For the major cities, the first blooms usually take place in the middle of March but the exact dates are highly dependent on the weather. Here is a guide on the best times to catch the cherry blossom season in Japan in 2020. 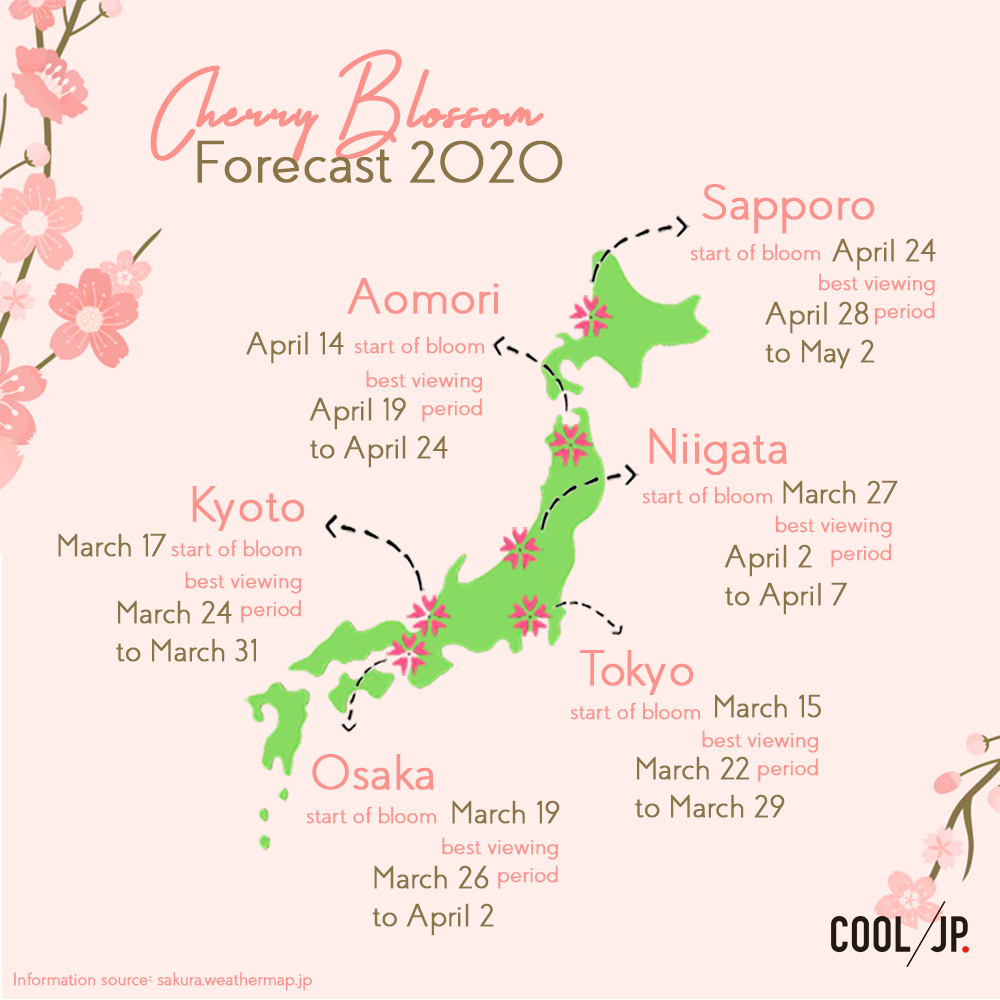 Forecast dates updated as of 20 Feb 2020. (Infographic by: Zee Obias; Data from: sakura.weathermap.jp)

Origin of hanami: From the gardens of the imperial court

The centuries-old tradition of hanami has roots way back from the Nara period (710-794). Originally, it was an activity intended only for the imperial court. But as time went by, the practice was soon appreciated by groups outside the elite ranks. In the Heian period (794-1185), high-ranking samurais began practising this tradition and not long after, hanami spread to the common people.

Large scale planting of these beautiful cherry blossoms was carried out in the Edo period (1603-1868) and it quickly became an annual and much-anticipated festival to hold cheerful feasts under the sakura trees. In modern times, hanami is celebrated widely throughout Japan with family, friends and colleagues. You can easily find food bazaars and hanami picnics in popular public areas such as Ueno Park, Yoyogi Park and along the Meguro River.

Tips for a great hanami party

✔ Bring a waterproof picnic mat. Believe me, it's not fun to sit on damp grass.

✔ If you want a good spot, it is a must to go early. The locals sometimes reserve their spot by spreading a picnic mat with their belongings or name tags. You may want to try it too but it may be difficult to find the spot afterwards when the crowd comes.

✔ Plan your food in advance. You will be spending at least a few hours enjoying the festive vibes so do bring enough food and drinks. Bento boxes and ready-to-eat food from neighbourhood konbini are good options for travellers because these are convenient and also delicious. Remember to get some sake or local beer as well!

✔ Besides food, bring some entertainment along such as books, music or playing cards. You can also just ask some good friends to come along for a great chat and soaking up the breathtaking sight of falling sakura petals.

✔ As in any normal picnic, bring essentials such as cutlery and plates, wet wipes and tissue paper.

✔ Be friendly and make friends with the locals around you. They are mostly friendly and welcoming of travellers. Who knows? They might even offer you some authentic home-cooked Japanese food.

✔ Not all parks allow picnics to be set up. In some parks such as Shinjuku Gyoen National Park, it is forbidden to bring alcohol and pets in. It is recommended to check the respective area's website for their rules and restrictions.

✔ Do not climb, pull or shake the branches of the cherry blossom trees. Some tourists have been caught doing these just to capture a good photo and obviously, this behaviour is not accepted. Treat the trees with love and care.

✔ Although hanami parties are usually festive and lively, please do not be rowdy and cause a nuisance to others. For example, singing loudly on your portable karaoke equipment and blasting loud music will be frowned upon.

✔ Do not be selfish and occupy more space than is necessary for your group. Hanami is a communal public activity for everyone to enjoy.

✔ Please clean up your mess and dispose of your own garbage after the hanami party.

With these tips and information, you are now better prepared to have an awesome hanami experience. After a wonderful day partaking in the hanami festivities, do also make it a point to wait till nightfall to admire the blooming cherry blossoms at night. These majestic trees are even more splendid when spotlighted by street lamps and lighting decor.

One last thing to take note is that nature is unpredictable. In order to not miss out on the once-a-year splendid but fleeting cherry blossom season, it is best to arrive a few days earlier prior to the estimated forecast.

Editor's Note: Due to the ongoing threat of COVID-19, it's important to practice precautionary measure when attending public gatherings. Practice proper coughing etiquette, wash hands frequently with soap and water and disinfect with alcohol, and avoid contact with individuals exhibiting flu symptoms. Click here for more information from the World Health Organization.