Kumamoto Food Guide: 6 Dishes To Try On Your Next Visit | CoolJapan

Kumamoto Food Guide: 6 Dishes To Try On Your Next Visit

From signature ramen to desserts

Kumamoto prefecture is one of those places in Japan that’s got everything you need for a quintessential travel experience. Famous historical attractions? There’s Kumamoto Castle, one of Japan’s most famous castles. Famous mascot? There’s Kumamon, the most famous mascot in Japan. Day trip to an onsen? There’s Kurokawa Onsen.

What’s not been talked about, however, is Kumamoto’s cuisine which will surely keep travellers coming back. Here are some of the prefecture’s delicacies that you should try. 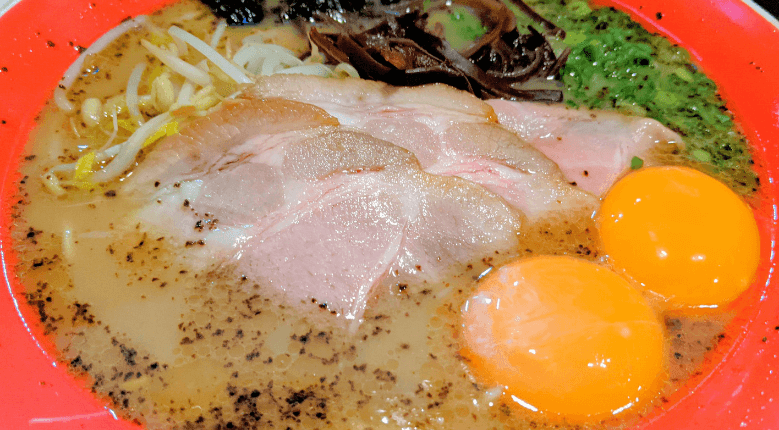 Kumamoto-style ramen at Kokutei is served with a double yolk! (Photo from: Jerome Lee)

Kumamoto ramen comes mainly with a tonkotsu (broth made with pork marrow) base, with this one served at Kokutei in Kumamoto city, a local ramen joint highly favoured by locals. Aside from the creamy tonkotsu broth, tender pieces of pork and strips of cloud ear mushrooms, what makes it special is the addition of double egg yolks into the dish: break it apart and mix it in with the soup, or have some of the yolk drizzled on a mouthful of ramen — it will hit the spot! 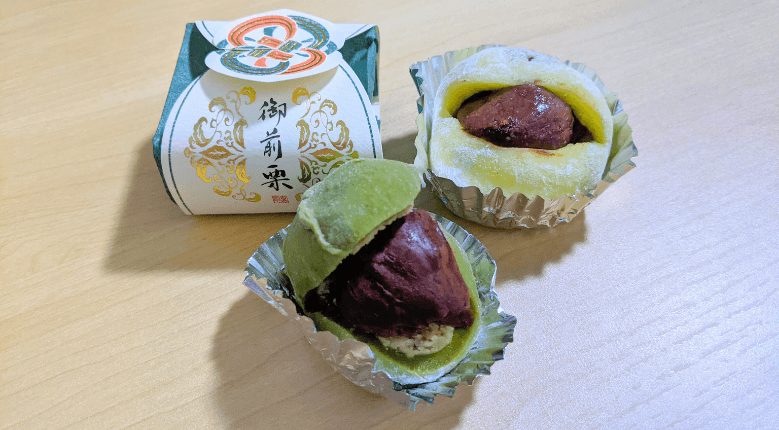 When it’s in season, Kumamoto chestnuts are used in all kinds of desserts, including stuffing whole chestnuts pieces in rice cakes that the Japanese call daifukus. (Photo from: Jerome Lee)

Chestnuts (marron in Japanese) are one of Kumamoto’s famous exports, and the prefecture ranks second in the total volume of chestnut production. These fruits bear an earthiness to them and produce a buttery, sweet flavour after being roasted — mainly incorporated into sweets in Japan, the presence of chestnuts in many a dessert can be seen everywhere: infused into whipped cream for a Japanese mont blanc, baked into a pie or cheesecake, or even stuffed into mochi and sold as a daifuku — the latter boasts a combination of springy textures of mochi and roasted buttery textures of chestnut, making a great snack best enjoyed with black coffee or tea. 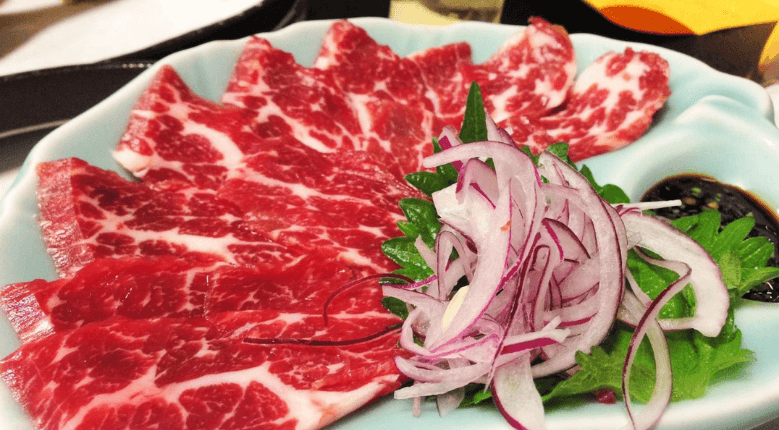 Basashi, which translates to raw horse meat in Japanese, is a delicacy in Japan and is always prepared to the highest levels of hygiene for safe consumption. (Photo from: Kumamoto Prefectural Tourism Federation)

The idea of eating raw horse meat might be off-putting to some, but it is considered a delicacy in Japan, originating from Kumamoto. Called basashi in Japanese, horse meat is slightly leaner in texture and sweeter in flavour compared to other meats, with the closest resemblance to the taste of beef. Most restaurants in Japan usually prepare this dish cold, served directly from the freezer to prevent the spread of bacteria, and mainly eaten with soy sauce, radish, ginger and Japanese shiso leaf. 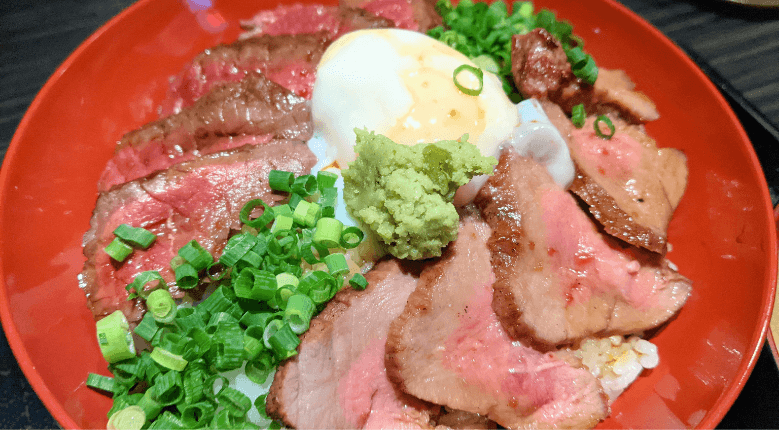 Cows that have been raised in Kumamoto prefecture are known mainly as Kumamoto akaushi (literally translated as ‘red cow’) and is vouched to be healthier, while still maintaining their tenderness and flavour. The picture above is an akaushi beef bowl served during lunchtime, and costs around JPY2000 and comes with a beer — pretty value for money for a hearty lunch! 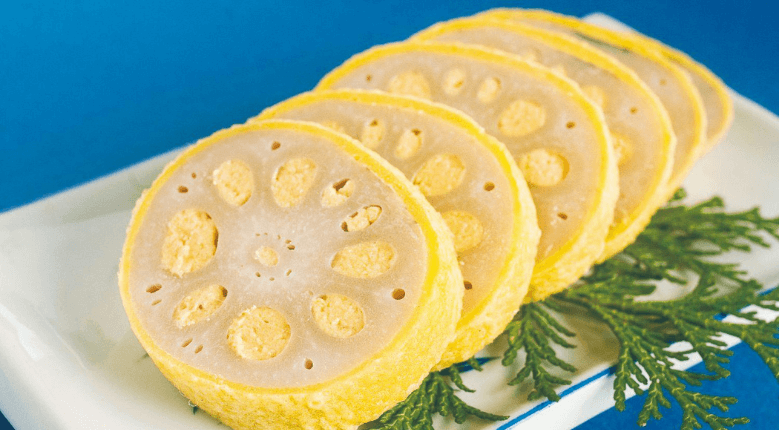 Karashi renkon — slices of lotus root with mustard stuffed in between, a Kumamoto speciality. (Photo from: Kumamoto Prefectural Tourism Federation)

Lotus root is an ingredient widely used in Asia and cooked in different ways, but this specific way of eating lotus root with spicy mustard is unique to Kumamoto prefecture. Of course, eating mustard alone might be too spicy for one’s tastebuds, so the mustard is mixed with miso paste to give it an umami hit — combine it with the crunchiness of lotus root and you got yourself a flavour/texture bomb in one simple dish. 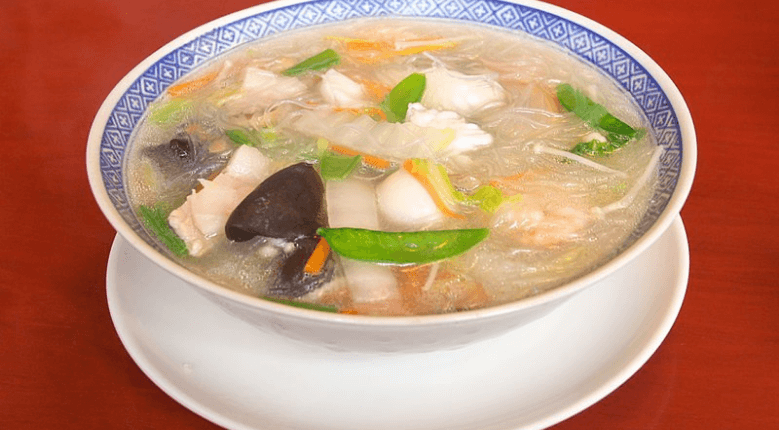 Taipien, a Kumamoto speciality which is adopted from the Fujian province of China and bears similarities to Nagasaki champon. (Photo from: Wikipedia)

The influence of Chinese cultures on Japan can be seen in many aspects, including food, and this influence is most pronounced in Nagasaki prefecture where dishes such as champon was created when Chinese traders were settling in Japan during the country’s Era of Isolation. Taipien bears the most similarities to champon, with the key difference being that taipien uses vermicelli while champon uses yellow egg noodles. It’s hard to find taipien outside of Kumamoto, so be sure to sample a hearty bowl when you are here!
READ MORE ON THIS TOPIC
Posted by Jerome Lee
on 27 Apr, 2022
Share this article:
More on this topic: CoolJP Food Guide
More Stories
Show More Posts