The Zouk Group has been reigning the nightlife and entertainment industry for the past 30 years with ventures in Singapore, Malaysia and Las Vegas. It’s now foraying into the F&B scene with a multisensory dual concept where gastronomy and music intersect, pairing omakase restaurant Sushi Ichizuke with Japanese-style speakeasy bar Here Kitty Kitty. 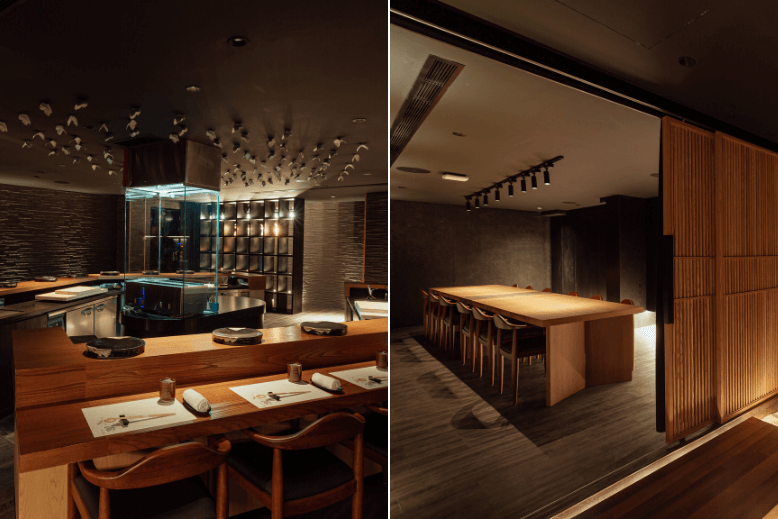 Hidden in the second level of the Cannery in Clarke Quay, Sushi Ichizuke sheds traditional garbs for sleek and clubby vibes — textured stone walls and floors in varying shades of grey are offset by dark wooden furnishings, the space gently framed by dim mood lighting to create a zen gastronomic temple. A bamboo forest-like walkway embedded with motion-sensing LEDs that light up as you pass through leads to the main dining area that seats 16 around a triangular counter, flanked by two private rooms that can hold eight and 12 respectively.

Helming the Zouk Group’s maiden fine dining venture is no less than Chef Ryoichi Nakatani, a familiar face for sushi aficionados in Singapore, who has done serious time at top sushi restaurants Hashida Sushi and Sushi Ayumu. A native of Chiba Prefecture, he honed his sushi-making craft for 20 years in a century-old restaurant at the famous Tsukiji Fish Market in Tokyo, then worked in the Roppongi area for six years before coming to Singapore. 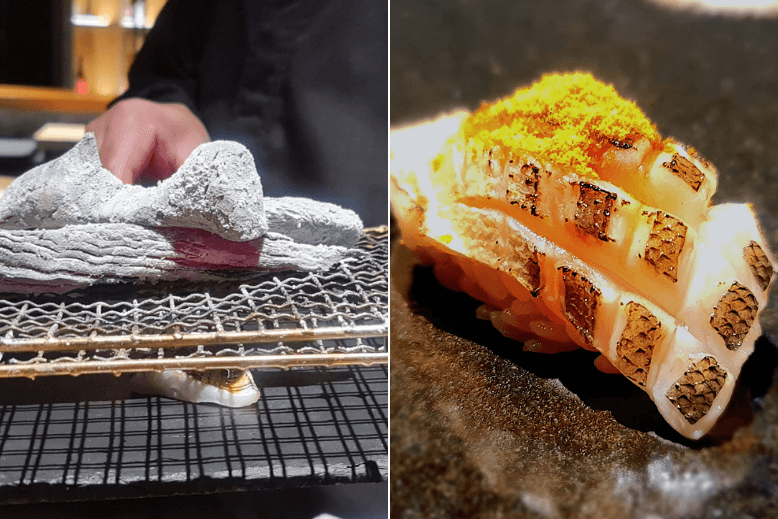 Chef Natakani’s specialty is Edomae-style sushi, a traditional Japanese cuisine that dates back to the early 19th century Edo period when the shari (sushi rice) is made with milder red vinegar instead of white vinegar, giving it a brownish hue. The sushi rice at Sushi Ichizuke is oh so good, made with Hokkaido rice and seasoned with two types of vinegars — moist, with just the right flavour to complement the seafood toppings.

Seasonal ingredients are imported twice a week from Toyosu Fish Market. The freshest of seafoods are magically transformed into dainty, tasty morsels by the skilful knife work and deft hands of the chef. Every piece of sushi at our tasting session was delectable. Standouts were the Kamasu, a small Barracuda from Nagasaki Prefecture that’s gently grilled over charcoal embers to create a smoky and rich flavour; and the Ika (squid) topped with Russian caviar enhanced by a light grating of rock salt and yuzu zest. No omakase is complete without Uni, and here you get a generous bowl of luxurious sea urchin atop a bed of rice paved with golden fish roe.

Another of Chef Nakatani’s notable dish is the House-special Handroll, packed with rich, melt-in-your-mouth Otoro and sweet Japanese radish, reminiscent of my lunch at Hasida Sushi. Chef Nakatani patiently answered all my questions about each dish in halting English. When asked about food and alcohol pairing, he advised: “Pairing of meals depends heavily on the preference of each guest, and our job is to understand and cater to each unique palate. I personally prefer sake and wine, which does not clash with or overpower the flavour of the food.”

Prices for Sushi Ichizuke’s omakase experience will seriously dent your wallet. The lunch menu starts from SGD80++ (five courses) to SGD180++ (seven courses) and the dinner menu starts from SGD220++ (seven courses) to SGD380++ (eight courses) but rest assured you’ll be amply rewarded by a culinary odyssey that doesn’t diminish with each exquisite bite. As I finished my meal, I asked Chef Nakatani when he’s happiest at work. “When I see the smiles on my guests’ faces. Those are my happiest moments,” he said. I gave him my biggest smile.

As you leave the restaurant, do meander through the Instagramable Here Kitty Kitty speakeasy bar. Its three concept rooms, vibrantly decorated and designed as vice dens, as well as a private bar and lounge, will transport you back to the flourishing nightlife heydays of 1950s Shinjuku where the Golden Gai once was.