The Nostalgic Allure Of The Traditional Japanese Kissaten | CoolJapan

Despite its popularity for being at the forefront of technological advancements, Japan maintains a quiet but firm relationship with nostalgia. This powerful sentiment is an important connection to the past and often brings happy memories.

A traditional kissaten. (Photo from: m_takahashi/CC BY-SA 2.0 via Flickr)

The Japanese culture has kind of found a perfect balance between the new and old. That is perhaps why the kissaten (喫茶店), a traditional Japanese coffee shop, has managed to survive the tentacles of modernisation and still holds a special place in people’s hearts today.

The history of the kissaten

Coffee beans saw its emergence in Japan around 200 years ago as a result of trade and growing influences from the western world. However, it only started to gain acceptance and popularity during the Showa Era (1926-1989). Consequently, this period also gave rise to the kissaten.

These traditional Japanese-style coffee shops often have a simple menu of sandwiches, light meals and sweets. The real emphasis is on coffee craftsmanship — from roasting beans to specific brewing methods and even down to the type of coffee cups used.

Back in its heydays, it was a place for Japanese businessmen to discuss matters and get lost in deep thoughts. It was a sanctuary where one can eat, drink and read a book in peace and it was also a space for young people to date and fall in love.

With a hushed atmosphere interrupted only by soft ambient music and the wafting of cigarette smoke, Japan’s traditional kissatens have become icons that are ingrained in Japanese culture.

Symbols of a bygone era

Japan’s strong coffee culture that still lives on today was borne from the concept of traditional Japanese kissatens. In 1935 during its peak, there were more than 10,000 kissaten operating in Tokyo alone. Besides traditional coffee shops, some of them found the opportunity to branch out into various interesting versions of the kissaten.

The jazz kissa has a long tradition in Japan. During its thriving years from the 1960s to the early 1970s, these were the places where enthusiastic jazz-lovers go to listen to vinyl records while nursing their drinks, engrossed in the music. Unlike the rambunctious jazz bars of today, the old-fashioned jazz kissa is a serious affair. These music cafes contributed greatly to Japan’s love affair with jazz, which is sadly dwindling today.

With the widespread popularity of manga (Japanese comics) in Japan, it is not surprising to see the sprouting of speciality shops such as the manga kissa. This is a calm oasis where manga fans come to read from a staggering library of comics to their hearts’ delight. You can choose to read in shared open spaces or in the privacy of a booth. Like the traditional kissaten, a manga kissa usually serves coffee and other beverages, simple snacks and set meals.

Another variety is the Utagoe kissa, which are cafes where people gather to sing songs that are usually associated with the leftist movement. These songs were used to protest against war, discrimination, poor working conditions and turbulent days. Of course, most of the Utagoe kissa have closed down to make way for karaoke bars. But there are still a few hidden away in the streets of Tokyo and people still visit them to reminisce and sing along to Showa folklore.

A portal to the good old days

In a rapidly changing world, we sometimes feel the need to look back and seek comfort in familiarity. To the older Japanese generation, stepping into a Showa-era coffee shop is like entering a time machine that transports them to the past. The dim lighting, sturdy old-fashioned seats and Napolitan pasta all evoke a blissful sense of nostalgia. In fact, the Japanese even have a word to describe this happiness associated with nostalgia — Natsukashii.

The golden years of the traditional Japanese kissaten are long gone and their presence is slowly fading from the coffee landscape of Japan as hipster cafes take over. The few ones that are still open for business are hidden gems of Japan. 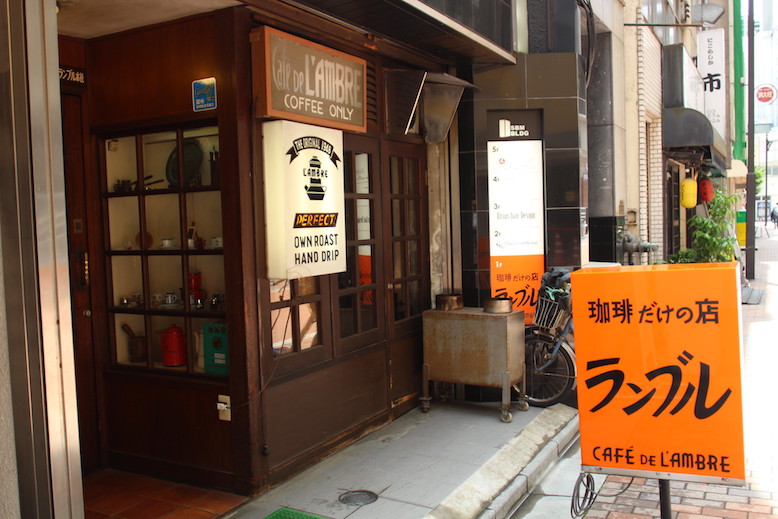 One such legendary coffee shop is Cafe de l'ambre, one of the oldest in Tokyo with a history dating back to 1948. Just like the typical old-school kissaten, their attention to detail is impeccable. Ichiro Sekiguchi, the founder, was obsessed in the pursuit of making the perfect brew. Not only did he hand-pick the cafe’s wide selection of beans and roast them every morning, but he also meticulously selected the cups and had the ashtrays custom-made.

At Cafe de l'ambre, they sell only coffee and coffee desserts. That is the extent of Sekiguchi’s passion. Sadly, he passed away at the grand age of 103 in 2018.

Fortunately, the legacy of this historically rich kissaten is now upheld by baristas who have worked side by side with Ichiro Sekiguchi and the coffee they serve is still excellent. One of these baristas is Fujihiko Hayashi, the nephew of Ichiro Sekiguchi, who is every bit as passionate about coffee.

As many of these old coffee shops are family-run businesses, their fates to cessation are sealed if the younger generation does not take an interest in them. Thankfully, because of a growing community of dedicated younger baristas such as Fujihiko Hayashi, we can still enjoy the old-world charm of a kissaten for now.